WHAT TEENAGERS DON'T WANT FROM YOUR BOOKS...Writing, Publishing, and the Teenager Pt. 2

Quick Update: I feel famous. Kimberly Pauley (a.k.a author of "Sucks To Be Me: The All-True Confessions of Mina Hamilton, Teen Vampire [Maybe]) is following me on Twitter after I talked to her on there. Crazy or what? I'd definitely recommend her books though...unless you don't want to laugh....

http://www.kimberlypauley.com/
So, anyways, while I wait for more questions about the YA genre to come in to answer, how about a sequel to my earlier post?

My own, personal list (as in, please do not go psycho and say I'm wrong or that I left out a million things) of things YA readers DO NOT WANT FROM YOUR YA BOOKS!

1.WE DO NOT WANT LESSONS SHOVED IN OUR FACE. Of course, the idea of every novel, story, etc. is theme. Theme is a good thing. You learn values through fictional characters, and see the consequences of common sins. However, I'm sure parents of adolescents are quite aware of what happens when you tell them what they did was bad...glazed-over eyes and repetition of the word "whatever". i.e... Say a YA protagonist lectured that shoplifting is naughty will not have the same effect of a YA protagonist shoplifting, and facing the police afterwards. It'll also give you a chance how the character handles themselves in panicky scenarios. 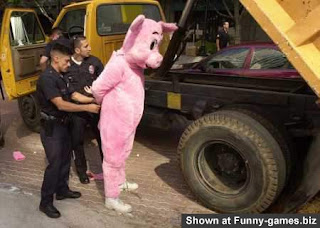 It happens to the best of characters, I suppose
2. WE DO NOT WANT A MENTION OF SOME EXTREMELY OLD FIGURE IN MEDIA. Yes, it is nice to know about that one legend that existed in the 60's...but if every celebrity, musician, actor your characters talk about require either a quick trip to Google, Wikipedia or a parent, that'll just waste time readers could be spending on your story. The same with dictionary terms, too...when I was younger, there have been books when I had to have a Word Document dictionary open while I was reading. Shouldn't be necessary!

3. WE DO NOT WANT CLICHES! AGH! Are you curious by what I mean? I'm sure a lot of you have seen or heard of this, but, Joelle Anthony’s old list gives a good idea of it. Hmmm *random idea* perhaps I should make a list of my own? Anyways, there are characters and scenarios that show up in teenage...everything! Be original. And if you're going to take an idea, at least breathe your own self into it. We can't all be Megan McCafferty. 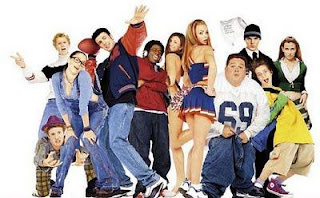 Save the teenage cliches for spoof movies!
4. WE DO NOT WANT ASSUMPTIONS! Yeah, you think you know teenagers. They all go on Myspace and obsess over that mouse-voiced Justin Beiber...Bieber? I have no idea, which is exactly my point. Just as adults are, teenagers are extremely unique, impossible to define, and unexpected. That book-smart nerd boy in your book who seems to get flawless A's, is in every honor roll program at his school, and makes his momma proud might attend "parties" on Saturdays that are very un-Harvard. The school's resident, er, "female dog", might volunteer at a shelter, and maybe dealing with that and her fellow students makes her so bitter. You never know! And trust me, there are plenty of teens who have no Myspace. Some even have FACEBOOKS! 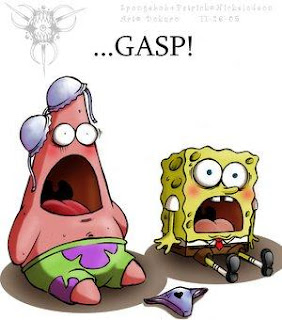 And lastly, the one I KNOW you've heard before, but cannot be emphasized enough...

5. WE NOT WANT TO BE TREATED...LIKE INFERIORS! Today's teen readers aren't all bumbling, Disney-channel-watching fan girls. I am glad to say I have friends who devour Anne Rice and Stephen King just as much as Stephanie Meyer and Scott Westerfeld. So, slow and simple reading, elementary-school worthy vocabulary, plenty of "OMG's" and "totally!", and characters with crushes on those scary Jonas Brothers...well, they just make us think you underestimate us. That you underestimate your audience.

There was a book series I read once (will not say the name, so no one is offended) during my post-Twilight phase. The hook was very vampire and werewolf-ish, and seemed like it would be interesting. Yet, the writing...was just wretched! A little kid might have written it. The plot could be predicted at the very beginning. The dialogue seemed like a bunch of Youtube comments. And it was a series!

Teen fiction is truly an amazing thing. They are stories of people growing from kids to adults, learning all the lessons that will mean their future. And yes, it's wonderful to write for them. Just be sure to have some respect for the mind of the teenager. 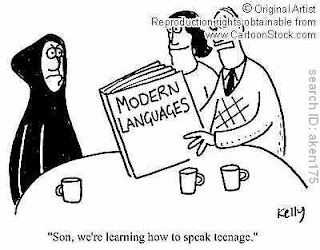 NOT NECESSARY!
Thanks for reading, and a huge thanks for subscribing when it comes to some of you! I feel like jumping up and dancing every time I see a bigger number on the followers list. Of course, that would only terrify every person in the room, so I try not to.

Bye! Stay tuned next week for another segment!
Made Public by Some Screaming Fangirl at 3:05 PM 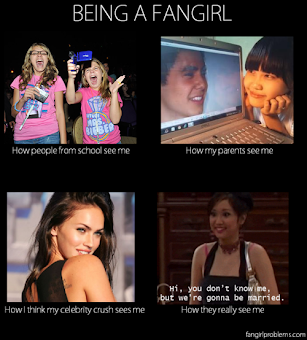 Some Screaming Fangirl
Writer/blogger person, semiprofessional teenager, pop culture junkie, and gum chewer. Her fangirl-dom (-ness? -ity?) began in the elementary school days, when she had every Pokemon merchandise and carried around a Powderpuff Girls doll when others made up imaginary friends. Nowadays, she’s into more…sophisticated stuff. Okay not too sophisticated. Whether her mad skills, like writing over the word limit or knowing everything about every Harry Potter book or fangirling at the speed of light, will come in handy…remains to be seen.

SSF’s favorite band is Australian, her favorite singer is Canadian, and favorite childhood band was British (no, not Beatles, surprisingly). Yet SSF is supposedly just Arizonian (or so the birth certificate says).

SSF once received a tweet from screenwriter Diablo Cody (Juno, Jennifer’s Body, Young Adult). On 9/20/10 to be exact. It. Was. AWESOME.

SSF has only read the first two chapters of 50 Shades of Grey. She says it’s much like being a kid allowed to watch the first two scenes of a R-rated movie - then being told to go to bed right as the gore/naughty stuff begins.

SSF does have a YA/urban fantasy series WIP, which she’s been writing since seventh grade. She can’t share all the juicy details, but the plot involves dream world monsters, mental hospitals, and lots of indie music.

SSF does hope to be an entertainment journalist one day. Maybe all this blogging and posting pictures of LOLcatz will lead to great things one day. Until then, let’s have fun, shall we?

TO COMPLETE AND UTTER STRANGERS

Tune into Some Screaming Fangirl (SSF) for blogs that look at the YA (young adult/teen) side of the book industry, with a fresh, teen perspective. Also expect tons of pop culture reviews and discussions (you know, like movies, music, TV, videogames, other books). Sometimes SSF even does both! Entertainment AND writing tips! Like a playlist for writing fight scenes or what TV show finales can teach us or the different types of best friends you see in movies.

Is there a YA topic you want to talk about? Maybe a slice of pop culture you feel like fangirling/boying out about? Leave a comment or let me know at somescreamingfangirl@gmail.com. Or just hit that follow button. I like friends.

Also, for YA writers, be sure to check out the WRITING, PUBLISHING AND THE TEENAGER posts.